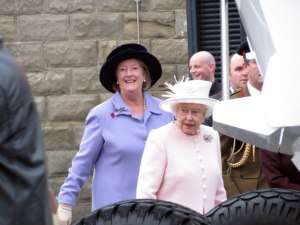 The Queen in Ireland

So we are one third of the way through 2011, and what has changed?
Emigration is still soaring, unemployment rampant, and confusion and discontent omnipresent.

Enda Kenny’s role as Taoiseach has been to many a success, in that he hasn’t done any severe damage as of yet which is always a plus!
The removal of the Seanad however is a contentious issue and he has touched a nerve, the reality is that we don’t actually need it, similar to the British Royal Family, it serves very little purpose but may have in the past but surely won’t in the future.

Nationalism and Anglo Hatred aside, the hullabaloo over the Royal Wedding is uncalled for, the level of farce and fickle nonsense that British Press has descended to, is pathetic, from a nation that once prided itself on its literary and media outlets it has become one obsessed with Jordan’s breast size and Kerry Katona’s coke rise. A come down from Shelley and Keats. Android phones, I-PADS, I-PHONES, I-TURNIPS and the progression of technology and WIFI has made news more accessible than ever but the over exaggerated claims that 2 billion people watched the prince of whatever-his-name is and the Kate chick walking down the gap is rubbish.

We live a world where one would think that everyone should have the ability to be journalists and share news and explore and educate the masses but instead we are resorting to spreading nonsense and bullshit through these mediums that should be used to better ourselves.

As a society we are reducing ourselves intellectually while claiming we are educated because we read papers or know the headlines! This does not deem one an intellectual it just means your eyes work proficiently. With a summer of discontent and emigration ahead, the embassies of the world will once again face the illegal immigrant syndrome of Irish abroad who have a fondness for the lack of rain. As our brain drain resumes and Australia and Canada fill we send our most esteemed academics since Joyce and Yeats to represent us in front of 100 million of our European peers. Already seen as a joke of a nation and experiencing subtle racism due to our debts to our EU cousins we then show them how we are spending our time. While we could be financially rebuilding ourselves we instead are funneling attention into Jedward for Eurovision.

As May day approaches and 80 countries across the world celebrate the workers movements we can at least spare a pleasant thought for Obama and the Queen who must be wondering what to do and what to wear and say when they arrive on our little island of saints and scholars and John and Edward.