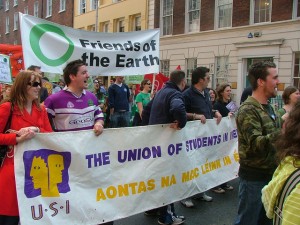 In Our first week in Nuig we are given an amusing and usually entertaining speech by the students union president which is usually a means to convey their presence in our new college lives; yet with elections approaching we must ask the tough questions such as do they perform any real function or merely mill around in hoodys giving condoms and pamphlets?

As a class rep for the duration of my degree and a former member of the Academic Council I have never ever felt required to make the transition to SU officer, when I spoke to numerous students and staff members prior to writing this article I was met with a lot of the same indifference to their real function or purpose.

The majority of students felt that the SU is to be judged by their rag week now of course college week, yet the sustained backlash to this raise and give week that now seems more about college life and drinking rather than charity has left a lot of academics and students wondering why the SU should even exist other than to write apology letters to papers and radio shows. For all the backlash they receive the money they raise has in the past been staggering and the success of the charity element has always managed to eclipse the unruly elements. Yet Is the charity element now waning?

The reality is that we as a student body need representatives and the Students Union do act as a strong representation of many of the issues affecting us.
However each administration has had numerous officer positions for example an equality office and Irish language officer yet when I asked a group of second year students who were the SU or what impact had any of these people on students lives, they couldn’t name anyone except some guy called “peter Something”.

As a former graduate of the UCC Summer Academy I was surprised on a recent trip to their campus to see the pride and involvement of the SU in everyday life, the drive and passion their SU has for their students and desire to not just hold meetings and handout free pens but to be active and make wheels turn was very exciting and interesting. Their constant presence to aid students who are marginalized and who don’t feel included or who are subjected to either cyber bullying or isolation was pleasant to see in action and the approachability factor is one that seems essential to a strong and functional SU.

A Union or body can only be as good as the sum of its parts and we must take responsibility for our SU and play a function but if they aren’t inspiring or aiding us sufficiently then we must return to their manifestos or the lack of them. As our nation turns a corner and aims to move forward we need to give time to an even more pro-active SU that is felt around us every day, an SU that drives the college forward and pushes the boundaries to make differences; to walk the walk and not just talk the talk! Its no longer about Wispa Bars or college bars it needs to be about sustained student support and presence as the Celtic Tiger’s cage lies empty and Ireland’s Golden years lie in facebook albums and bebo memories maybe we need to re assess the function of a Union we are part of but often don’t feel belonged to.