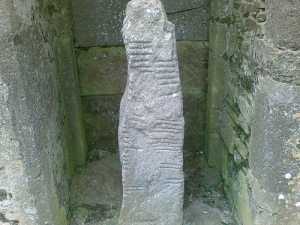 What started as lines and marks  on trees in the form of Ogham writing, became an official European Language on Jan 1st 2007 and now is on the verge of going in reverse. How would you gauge progress in a language that is all around us on sign posts and in media yet according to our most recent census only 80,000 people can speak it fluently out of a population of 6.1 million, that is a staggering 1.31 per cent!

The forcing of such evil horrors as the Tuisceal Ginideach and Modh Coinniollach on children from age 5 to 18 has always been a debated topic in the history of our little island, and if Fine Gael comes into power in the next few weeks, the reality is we might be able to cut 3 years of that linguistical hell off  but will we benefit as a people or are we losing something unique and valuable?

The inclusion of the language on the curriculum for decades  has led to Gaelscoileanna, TG4 and Sharon Ni Bheoilin, is this enough to merit its inclusion further; the longer we have had the language the less people we have had who can claim to speak it fluently! ironic or what, however those who  have partial Irish has increased due to the gaeltacht summer schools etc.  The reality is that maybe we should accept Scotland’s model and have it as an option for the leaving cert but keep it compulsory for primary school and junior cert, and those who truly love the language can take it for Leaving cert while others can focus on other subjects.

A recent article in the Irish Times let secondary school students voice their opinions and i also spoke to  number of these young adults and they were very clear in their message. We dont need it! we need to get jobs not to say Ciunas, Bothar, Cailin, Bainne! Many students feel the time dedicated to Irish could go into learning a further European or world language enabling them to gain further employment after or before college.

We need to ask ourselves the tough question though and say was Irish a true luxury of the Celtic Tiger years and now that we are broke we are cutting off our heritage! Maybe we are, maybe we are not, but no one should have to endure forced education that many dont enjoy and very few accept Daithi o Sea and Hector have benefited from.

Making the language sexy with Des Bishop hasn’t helped a considerable amount and although NUIG is a bilingual campus most students find the names of the building confusing and dont know what they mean or why they are called áras Blahhh and Aras this n that.

For those who love the language it should remain and be supported fully, for those who dont maybe we need to allow something else to be included on the leaving cert course, more important areas to be covered like enhanced Sexual Education, Improved Road Safety and First Aid or Drug and Alcahol awareness courses.

Dont bin the Gaeilge, Dont Shelve it! Its our Heritage and OUR language but maybe give the Optional leaving cert a run and if the Gaeltacht areas are being financially affected then look to further employment out there for those families in other areas that will benefit them and educate them in something new and exciting, we cant ever forget where we came from and our language is a huge part of our identity so Fine Gael dont Bin it but respect it and those who speak the words of  our generations.